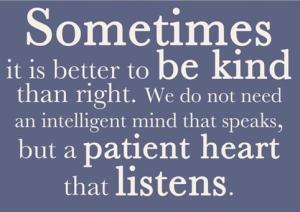 I’m a fan of the chat. I’m a talker. Sometimes I get so into a conversation that I forget to wait my turn. Ever tuned into an episode of Gilmore Girls? (Yeah, I’m dating myself a bit.) I have NO problem following the word volleys. Get me and a girlfriend together, add some coffee and a few hours and there will be non-stop chatting and over-chattting (talking over each other with “I KNOW!”s and “Are you KIDDING me?”s  Hey, it may annoy an observer, but we know exactly what’s being said.

At this point in life, I’ve known my husband for over half our lives. We were just barely eighteen when we met outside my dorm that Fall. It’s safe to say that we KNOW each other. We’re both talkers. When it’s just the two of us or when we’re with a couple of friends, our friendship is on display. We can TALK! Before you know it we’re telling stories, talking over each other, and putting on a show. We don’t mean to be, but we’re a regular comedy routine sometimes.

It’s also safe to say that we both require being heard; it’s the root of our biggest disagreements. I wouldn’t say that either of us have an unrelenting desire to walk away the “winner” of an argument, but we don’t go quietly into that good night, if you know what I mean. Unfortunately, we will get louder trying to make our points to the point that one or both of us is frustrated to tears or anger or both. This isn’t something that happens often, but when it does, we’re passionate about making sure the other one understands our position and justifies our feelings. Not entirely wrong…not entirely right, either.

Today’s vow has to do with winners and losers in communication. 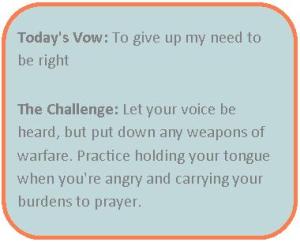 Give up my need to be right? That’s going to be a tough one. I’m more than willing to admit a fault, but when I’m right, I want to be told I’m right. I don’t think it’s an “I win. You lose.” situation for me. Down deep, I want to get his affirmation that I solved the problem or at least didn’t cause it.

Upon closer examination, and some prayer this morning, I’ve realized that I want my husband to value my input more than I want to be right. I want him to be proud of me…or moreso, not disappointed when I screw up. At least 85% of my need to fuss and argue is to prove myself to him. I’m keeping a tally sheet in my head (and in my heart) of all of the times I’ve screwed up, and I’m pretty sure he’s not keeping track of any of it. The last thing I want is for him to avoid me to avoid a match.

Time-Warp Wife added: “The person who values the other higher than himself is willing to let go of the anger, gracefully drop out of a fight and bring it to God in prayer. Stepping back (by trying to diffuse an argument in kindness and with love) and leaving it in the hands of the Lord is taking a high road and should never be deemed as taking “loser’s seat.”

I’ll be praying for the strength to say my peace and then leave it in peace. Marriage is intended to be a coming together of two different people with different approaches, different goals, to become like-minded, having the same love, considering the other before me.  That last bit of the challenge – practice holding your tongue…whew. I needed to hear that and be challenged by that.

View all posts by kristen

in case you missed one

what I write about

Some of my fave blogs

pay no attention to the man behind the curtain

each empty bowl is held by someone